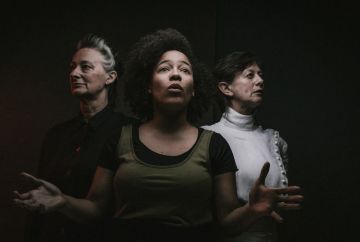 1913. Revolution stings the air. In an orchard two women meet in secret.  Their actions have divided them.  Divided a nation.  Split their cause in two.

What happens when the two women are suffrage leaders and rebels; Emmeline Pankhurst and Millicent Fawcett?

The Cause considers the impact that a lifetime of political campaigning has on an individual.  Asking how far would you go for what you believe in? Marking the centenary year of the first votes for some women in 1918, this dynamic production has an original music by Sarah Moody (Devil’s Violin) and film animation by artist Catherine Cartwright, projected for beautiful visual effect.

Brought to you by Dreadnought South West who toured Oxygen celebrating the great 1913 women’s pilgrimage in 2013. To find out more about their work go to:  www.dreadoughtsouthwest.org.uk